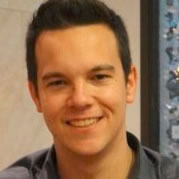 We are starting a new series of articles devoted to improving your magic skills. In these articles, you will find a great deal of the latest tips, tricks and strategies from the pros. Today we are going to focus on limited and draft. Would you like to know a bit more about Golgari Gates?

Getting into Golgari Gates

Why Golgari Gates is one of the best archetypes of Guilds of Ravnica and why you don't understand it well?.

It's been a few weeks since the release of Guilds of Ravnica and since then my vision of the format has evolved quite a bit over time.  In the beginning, Golgari was one of the guilds that I liked least because I was a little bit biased by the first days when you could only play sealed in Magic Online. Undergrowth is clearly the worst of all guild mechanics because there isn't a good way to fill the graveyard and creatures in b/g colors are rather weak.

In the first couple of drafts that I played with Golgari I ended up with decks with a high density of creatures and a good curve  to take advantage of undergrowth and making big Rhizome Lurcher to seal the games, some of these decks were moderately good because Golgari was almost always open and it was not uncommon to end up with one or two bombs like Izoni, Thousand-Eyed, but still worse than a good Dimir or Izzet.

One day I played against a well-known magic online player, He played a Golgari-based deck but very different from what I saw before, He chose to draw  and he was playing plenty of 0/3 walls, burglar rats, severed strands, guild-gates and good cards of various colors and I thought he was into something that maybe the rest of us missed. 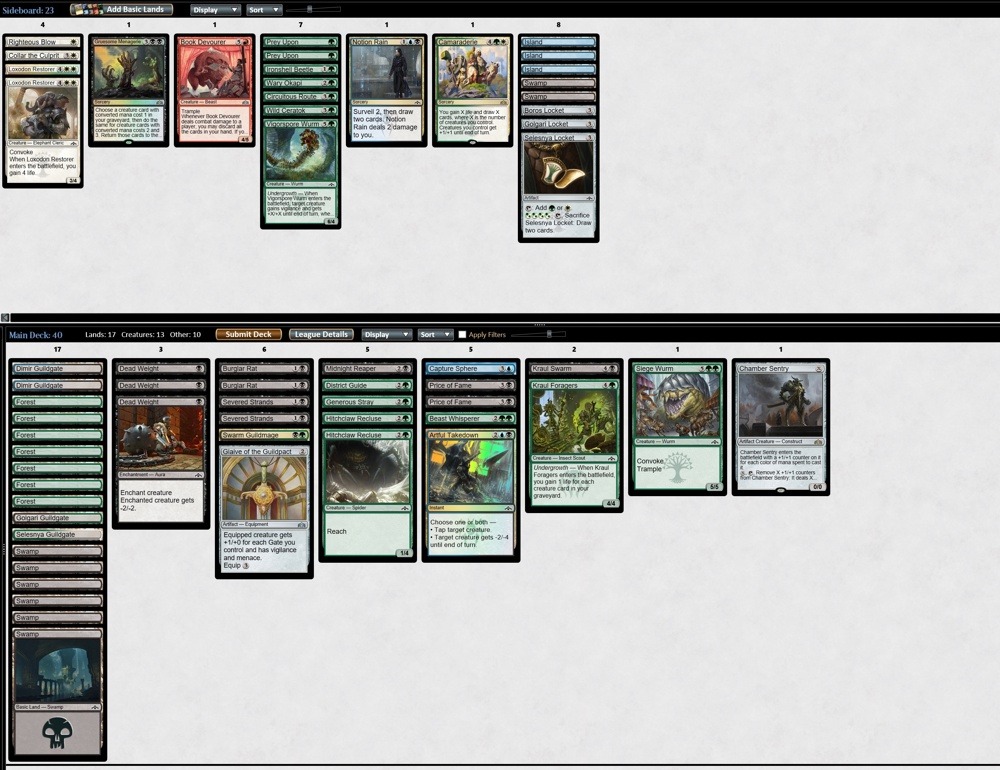 The key cards in Golgari Gates

Each draft deck should work as a constructed deck, I do not believe in cards that are good or bad in general, but in cards that together make a good deck and it is important to understand very well your role and how the game will be developed.

Versus the majority of decks, your plan will consist in attacking their resources, destroy their most dangerous threats and end the game in 3-4 turns with one of your lurcher or some other win condition.

It is important to have win conditions that end the game quickly once you have control of the board versus decks like Dimir or control strategies that could recover from initial wear and put you in trouble.

Against decks like Boros is not so important if you are at a reasonable life total because their average card when the game reaches the late game has less value, their cards tend to become less valuable as the game goes longer and your cards to increase in value, most of your containment cards end up being cantrips. 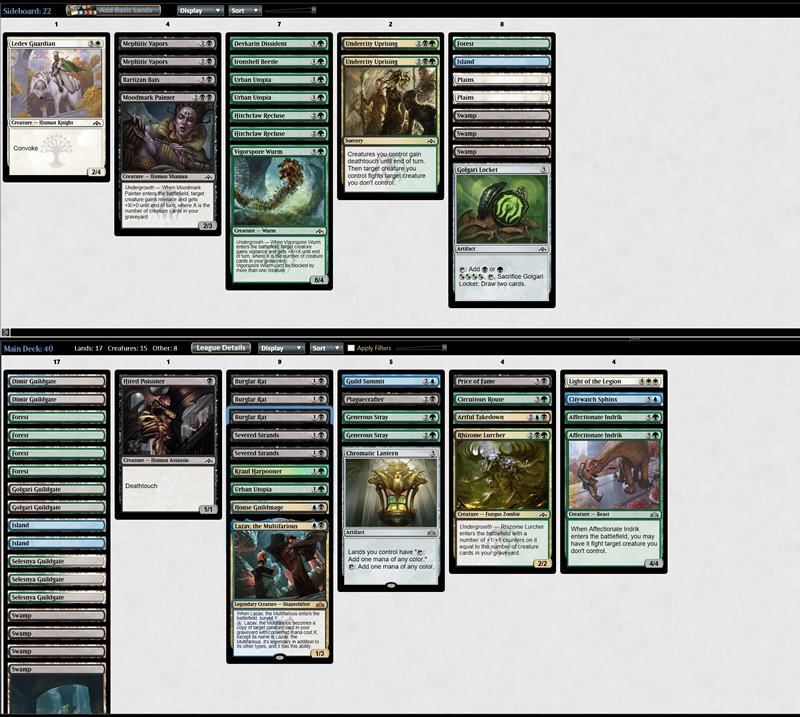 Card distribution for this archetype

A good distribution for a deck of this type would be something like the following.

Always trying to play a Portcullis vine more than Barrier of bones since the possibility of sacrificing it is better on average than  Surveil, unless we play disinformation campaign, hired poisoner is also a good converted mana cost 1 card.

All dead weight you can pick.

It is one of the best common of the set in my opinion, and it works very well when making your opponent to play first.

All the burglar rat you can pick

They are key to wearing out your opponent and is fodder for severe strands.

It is a cheap unconditional removal that fills your graveyard, and the possibility of winning life is very relevant in this kind of deck.

It could be from lurcher to any other splasheable bomb, preferably with flying. One of my favorites is Glaive of the Guildpact because it gives your rats and stray a lot of value.

All the good removals you can get

It is important to be able to deal with threats,  Prize of fame is one of the best, and among commons,  Deadly visit is also very important.

As long as you don't have a good card to pick for the strategy ill rather take a gate, covering your back is always good in this sense and makes it possible for us to play the best cards of other colors and get the best potential out of cards like the glaive or guild summit. In decks with any of these cards, you could play between 5 and 9 gates because you have much redundancy of converted mana cost 1, 2 and 3 and you have no problems to play the land tapped when necessary in turn 2 3 4 and 5. Prioritize the gates half-off color like the Dimir or the Selesnya as they are colored mana sources that we get for free, it is much more expensive to play a basic island or plain than swamps and forests.

This is one of the best cards in the strategy since it assures us that we will almost certainly be the kings of the late game and will make it possible to play 17/18 lands without the fear of flooding.

Good cards of all colors!

In this kind of deck you can play almost any bomb that you open or pass which is a great incentive for this kind of deck, you will have no problem to play a Trostani discordant or an Experimental frenzy. 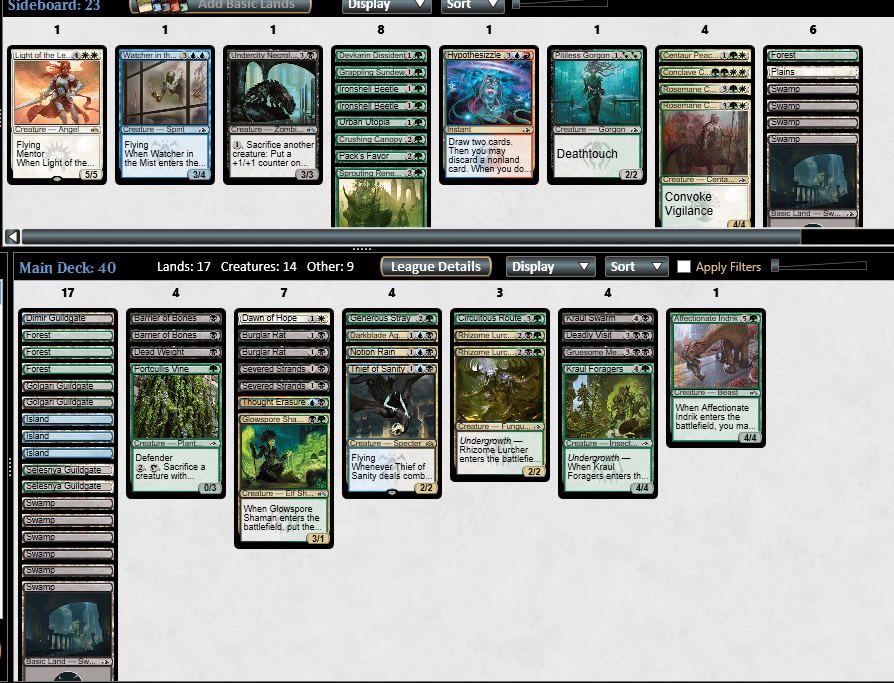 All the cards that do not fulfill one of the basic functions of the deck, creatures that are not good blockers or generate an advantage, because this is not a deck that will ever want to get into a race so avoid all creatures such as Bartizan rat, Wary okapi or Spinal centipede. Pitiless gorgon is very deceptive because it looks like it could be good in the deck but is too expensive for the impact it has and in the end, we will have to end up trading for a mediocre creature, I advise you to avoid it if possible. Nor will we want mediocre combat tricks or finisher.

Cohesion is very important and that all the cards have their role inside the deck if you manage to do so the result will be a very solid and good deck. Take into account draw first if you have enough Dead weight and rats even versus Boros decks!

Greetings, and good luck at the tables!

If you liked this article maybe you will also find interesting on of the following ones How I got a 83% Winrate with Selesnya Company in Historic, Getting Started on Magic Online: Burn!